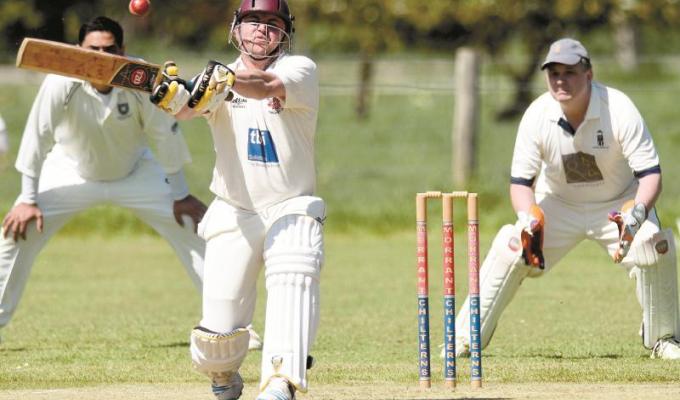 Hurley won their penultimate match of the season at a sun drenched Wooburn Narkovians on Saturday, beating their hosts by five wickets.

Yasir Gul called the toss correctly and asked the hosts to bat first, sensing some moisture in the pitch.

Wooburn’s opening pair Ben Cooper (22) and Ben Sidders (34) established a solid platform with a partnership of 54 in 10 overs before Naeem Akhtar (3-39) collected three scalps within half a dozen deliveries.

Sidders was the first to go to a delivery that seamed off the pitch to take the top of off. Akhtar’s next over saw Cooper edging to the keeper and Tom Wright bowled off his pads in consecutive balls.

Ian Cuthbert (29) and Paul Cooper (17) added thirty-seven for the fourth wicket to keep the scoreboard moving in excess of five per over.

The introduction of Phil Ridgeway (2-10) after the drinks break paid immediate dividends, his first delivery was slapped to mid-on by Cuthbert where Umar Zamman was waiting.

The Hurley reply suffered an early setback, losing Clive Williams (2) in the first over to Pickard. The innings stuttered along at four an over with Kelvin Baillie (21) and Yasir Gul (24) making useful contributions.

The loss of Mike Walton, well caught at slip by Johnson off Barker, brought Hamzah Zaman out to join Umar Zamman in a match winning partnership.

With the required rate nearing a run a ball the match was in the balance but Hamzah (69*) and Umar (51) gradually got into their stride, smashing the ball to all parts in a stand of 125 in sixteen overs.

When Umar departed, bowled by Wright, only nine more runs were needed for victory.

A couple of boundaries from Akhtar brought the scores level leaving Hamzah to hit the winning runs, finishing unbeaten on a career best 69 and giving his side victory with more than six overs to spare.

Hurley's eight wicket defeat to Theale & Tilehurst on Sunday left a bad taste in the mouth, caused by a batsmen who refused to do the honourable thing and walk when he edged to the keeper.

Chasing 136 for victory Theale's Rob Dimmack (40no) was adjudged not out to a healthy edge behind off Taylor, and he and Tich Davidson (55no) carried the hosts home with 16 overs to spare.

Hurley's 2nd team lost by 43 runs to Bledlow Village on Sunday. Chasing 223 for victory they were restricted to 179-3 , despite Naeem Akhtar managing a fine century (101).