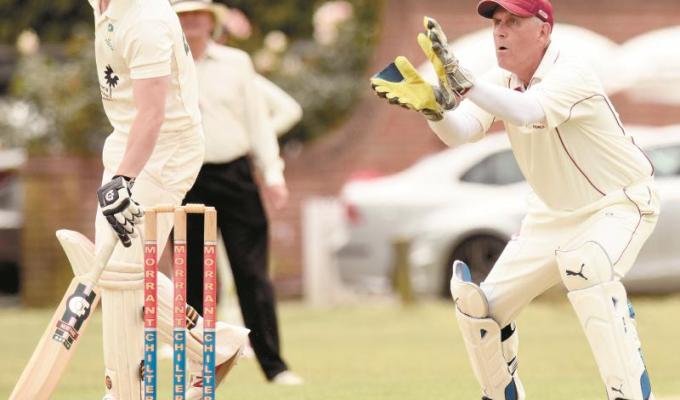 The annual fixture between Hampton Hill and Hurley resulted in a 51-run win for the visitors, despite several of their number being stuck in traffic as the game got underway.

The annual fixture between Hampton Hill and Hurley resulted in a 51-run win for the visitors, despite several of their number being stuck in traffic as the game got underway.

Home skipper Nally Fernando opted to bowl on winning the toss and Mike Walton (below) and Mandeep Singh initially found it difficult to get the scoreboard moving against some accurate swing bowling from Tahir Butt (2-20) and Andrew Blair (1-28).

Butt’s opening spell was particularly miserly, conceding only four runs and taking the wicket of Mandeep, while the next over saw Walton fall to a good low catch from Fernando off Blair. At 18-2 a rebuilding exercise was called for and Clive Williams (30), Naeem Akhtar (31) duly obliged, adding 52 for the third wicket. The middle order failed to add many runs, however, and when Haider Ali-Baig fell to the returning Butt, the visitors languished at 126-8. The saving grace for Hurley was the depth of their batting line up, and Joban Singh (22no) and Parvinder Hunjan (23no) added an unbeaten 44 in the last six overs to take the visitors to 178-8, which looked to be a par total given the conditions.

The Hampton Hill reply struggled from the start, losing Oisin Shrivastava in the first over, caught at square leg by Akash Singh off his brother Joban. Hunjan then got in on the act removing Harry Coates, before Omar Saleemi decided to go on the attack, racing to 19 from his first nine deliveries.

But with the batsmen coming down the track, he was stumped two balls later by Walton. Ajmal Bhatti held the innings together for a time, batting patiently to reach 13 from 30 deliveries before chasing a wide ball off Hunjan which was sliced to Inderjeet at point.

Tahir Butt (27) and Sudipta Das (32) kept their side in with a shout adding 33 for the sixth wicket but their innings was eventually wrapped up for just 129 in the 29th over. Ravi Singh finished with his side’s best figures of 3-16 while Joban Singh took 2-35.