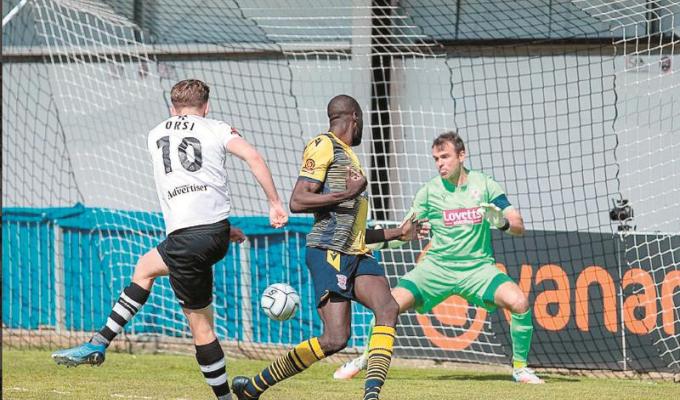 Alan Devonshire has admitted it’s going to be extremely difficult to replace the goals of Josh Coley, Danilo Orsi-Dadomo, and Sam Barratt, if they all leave as expected this summer, but he’s already well on the way to remoulding the squad ahead of the new season and is confident he can take the Magpies forward once more.

United face a tough task just to replicate what they produced last season, with rivals set to flex their financial muscle once again in a bid to get back into the Football League.

Devonshire is resigned to losing top goalscorer Orsi-Dadomo but has managed to retain the core of last season’s squad. He’s also added four or five new players to it already and will likely bring in one or two more before pre-season gets underway on July 12.

This week the United boss signed a new contract which will keep him at the club until at least 2024. In that time, he hopes to keep the club in the National League, as a bare minimum, and lead them into a new ground at Braywick Park, subject to planning permission. He also fleetingly spoke of a possible promotion challenge at some point in the future, but for now he’s focused on the job at hand, replenishing the squad to ensure they’re competitive once again next season.

“Well, I hope we can (be competitive),” he said. “But it’s going to be difficult. This is a hard league, but the aim is to try and push on again.

“It’s going to be difficult to replace 40 goals, which is what we’re going to lose this year.

“That’s really something, so it’s a rebuilding job again to a point.

“I’ve kept the names I’ve wanted to keep, and it was out of my hands with the three boys that are leaving. It’s going to be difficult, but we have to do this every year. I can probably announce that (the squad) in a week’s time, and then everything can be done at the same time.”

There was little hesitation from Devonshire in signing a new contract with the club ‘he loves’, and he’s keen to build on the progress they’ve made in recent seasons and lead the Magpies into an exciting new era of football.

“At the end of the day, I’m loyal,” he said. “I love the club. I never wanted to leave the first time around, and to get the chance to come back, and to do what we’ve done, I’m really pleased about.

“I want to try and take us into the new ground and ensure we’re still in the National League.

“Hopefully, we can build from this point. That’s the plan. But things don’t go to plan sometimes.

“If we can be in the National League, and move into the new ground, then we might have an opportunity at getting promoted.”

Interestingly, Magpies haven’t gone for like-for-like replacements for the likes of Coley and Orsi-Dadomo, but Devonshire's keen to integrate them into the squad as quickly as possible when pre-season gets underway and will be keeping his fingers crossed they’ll prove equally effective. The aim is to improve again next season and, with the likes of Reece Smith breaking into the first team, and Josh Kelly returning to full fitness, he believes it’s possible to do that.

“We want to improve every year,” he said. “But when you’re always losing players it’s hard. We just have to wait and see what happens.

“We’ve signed a few young boys to replace the boys who are going into the league, and, if they can do what the other boys have done, we’ll be delighted.

“Reece is part of the squad now; he’s a talented boy and Josh Kelly will hopefully have better luck with injuries. He hasn’t had a lot of game time. If we can get those two playing more it will be a big plus.

“Of course. We take the young players, see what they’ve got and try to integrate them into the squad and make them better.

“We’ve brought in two slightly different players to Coley and Danilo, but they play in their positions.

“They’re different players but hopefully they can be effective. We’ve signed four or five players already, so, that leaves space for one or two more after that. This is part of the job.

“I’ll be working all the way through to pre-season on July 12. It’s not long now. But as long as we get the fans back, that’s the main thing.

“That’s all I’m worried about because it was a weird season without them, even though we did well.”