Comley confirms he will leave Maidenhead United this summer 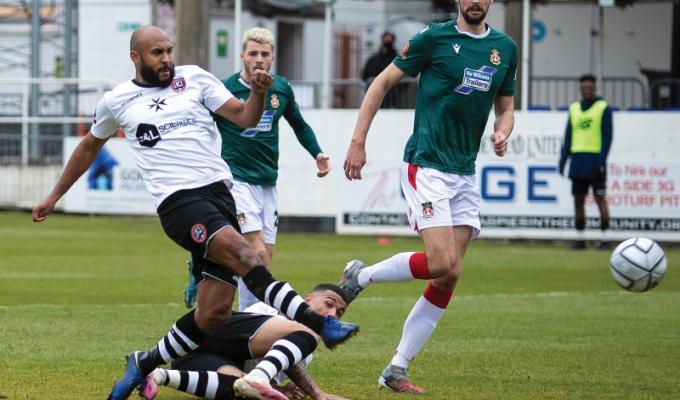 James Comley scoring for the club against Wrexham this season. Photo: Darren Woolley.

James Comley announced last night (Wednesday) he would be leaving Maidenhead United this summer, thanking everyone involved at the club for making his time ‘a pleasure from start to finish’.

The Montserrat international revealed the news on Twitter before the club confirmed his departure and wished him all the best for the future.

Comley joined the Magpies in January 2016, initially on loan, before making the move permanent the following summer.

He helped the side to promotion as champions from the National League South the following season and has since been an influential member of the Magpies’ midfield in their four National League campaigns. In the first of them they achieved their highest ever league finish of 12th, while last season Comley was one of the side’s most consistent performers as they finished 13th, and briefly flirted with a play-off challenge.

On Twitter he said: “Big thank you to everyone involved with Maidenhead United my time here has been an absolute pleasure from start to finish. Played in some great changing rooms in my time at the club and of course winning the National League South. All involved with the club.”

Comley began his career in the youth system at Crystal Palace and played four times in the football league before moving to Canvey Island and then St Albans City where he was signed by Alan Devonshire. He went on to make 202 appearances for the club. It hasn’t yet been confirmed which club he is moving too, however, he is the second player to leave the club this summer after Josh Coley moved to Exeter City in League 2.