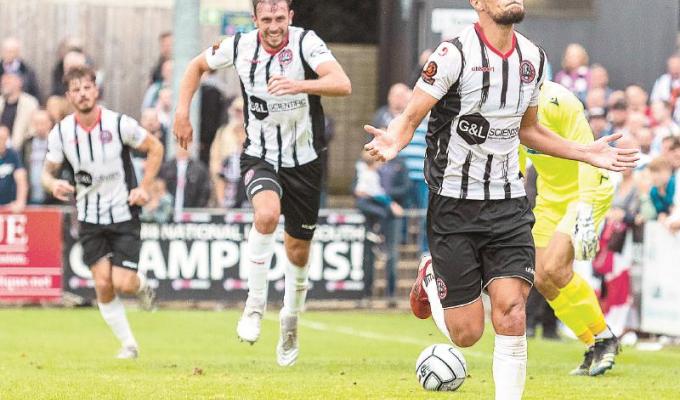 Maidenhead United stopped the rot of defeats, looked solid in defence and were dangerous in attack, so it was three big boxes ticked for manager Alan Devonshire in Saturday's 1-1 draw with Grimsby Town.
The Magpies boss has been struggling to strike the right balance between attack and defence as the side lurched from disappointing defeat to disappointing defeat.
But Kane Ferdinand's late header, from a wonderful first time cross from the returning Shaun Donnellan ensured four straight defeats didn't become five as United deservedly claimed a share of the spoils against Paul Hurst's promotion contenders.
The Magpies more than matched their third placed visitors for long spells in the game and should have held the lead long before Erico Sousa volleyed home Harry Clifton's right-wing cross to give the visitors an ill-deserved 73rd minute lead. However, the Magpies dug deep, and Ferdinand anticipated Donnellan's cross from deep to head past James McKeown with seven minutes to play.
The result has also rubbed some of the gloss off Grimsby's start to the season. While they remain unbeaten, this wasn't quite the marker they'd have hoped to have sent out to league rivals.
Speaking afterwards, Devonshire said: “I thought we were solid, and looked dangerous throughout.
“I don’t think our wide boys played all that well, and they’d admit that themselves, but we came away with a 1-1 draw.
“Listen, it would have been criminal if we didn’t get something out of that. We’ve got a result and we’ve stopped the rot as they say.
“We’ve now got Kings Lynn on Saturday and then we go to Yeovil on Tuesday, but I’m hoping to get a couple of players back in the next week or so. It bodes well for the future because we’ve got some big games coming along now.”
When the final whistle blew, this was a draw that felt a lot like a win for Devonshire's men and should give them plenty of confidence heading into Saturday's home game with Kings Lynn Town. The return of Sam Barratt from injury, and Shaun Donnellan - after 10 months on the sidelines following an operation on his hamstring, means the Magpies look more capable of scoring goals and more capable of keeping them out of the net.
“Listen, we haven’t played that badly this season,” added Devonshire. “We had that bad half against Torquay when we went 4-0 down, but against Stockport we were down to 10 men for an hour and nine men for 20 minutes.
“It would be good to win soon, but victories will come with performances like that. And when we get more people back (from injury) we’ll improve again.”
Kane Ferdinand was principally signed from Woking for his ability to score goals from midfield, and he’s obliged with a couple of vital ones already, netting the late winner in Maidenhead’s 2-1 victory over Halifax as well as Saturday’s crucial leveller.
Devonshire added: “It was a good ball in and that’s what Kane’s good at, arriving late into the box. We’ve got to get better at delivering balls into the box like that from our full backs, because we often don’t need the extra touches.
“I’m pleased for him, and he can build on that hopefully.”