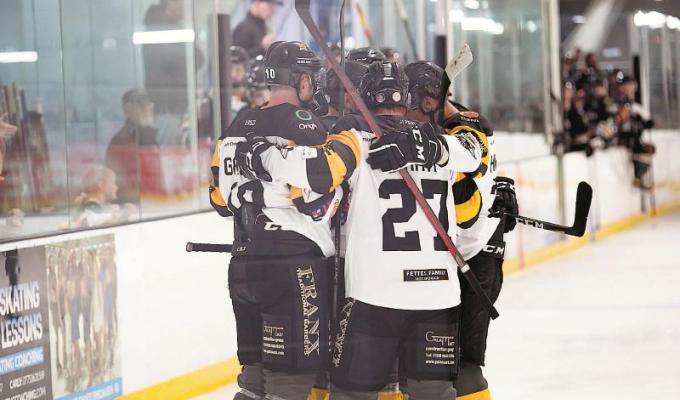 Head Coach Doug Sheppard’s team bounced back from a defeat against the Raiders on Saturday night to secure their second win of the season on home ice.

Sheppard felt that his team’s display against Milton Keynes was cause for optimism.

He said: “If the only game of hockey you saw this weekend was at home on Sunday against Milton Keynes, you’ll have come away impressed by the teamwork and determination shown by the guys.”

Veteran James Galazzi lead the way with two goals while netminder Curtis Warburton was unlucky not to register his first shut-out in Bees colours.

Sheppard continued: “Sitting together in the locker room after a poor performance against the Raiders the previous evening was when they (the players) talked about how they had to improve.

“We had been outworked and outplayed. That’s where, as coach, I look to the leaders on the team to step up.

“And that’s what happened on Sunday. The oldest player on the team, James Galazzi, came up with two goals. I was proud of how the whole team performed.”

Four points this weekend could transform the Bees season and move them into the top three of the competition.

However, the Bees will be without star names Niklas Örmarker, Will Stead and Josh Martin. But with a long season ahead no player will be rushed back despite the significance of a potential double win this weekend.

First up is a trip to Telford on Saturday evening. The Tigers sit just two points ahead of the Bees in the standings.

Then it’s derby day on Sunday as Basingstoke Bison visit Sheppard’s side.

There will be added spice to the rivalry on this occasion as former Bees players Aidan Doughty and Brendan Baird are set to feature in the Bison line up. The Bees themselves contain former Bison’s in Josh Kelly and Bayley Harewood.

It has all the ingredients to be a spectacular showdown at the Slough Ice Arena on Sunday night.