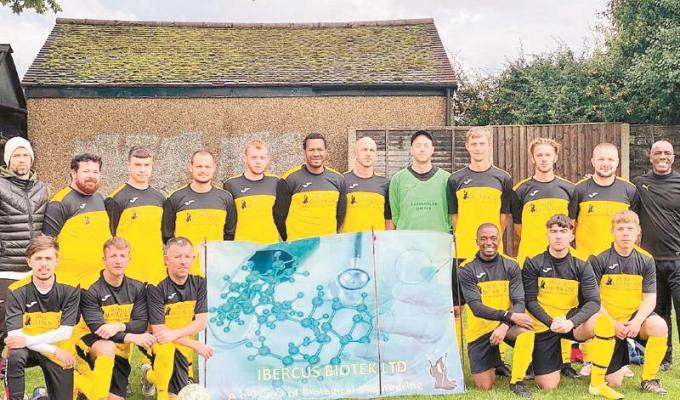 Iver Heath have secured the Division One title after a 3-2 win at Old Windsor Reserves on Saturday, writes Rob Stevens. It was an entertaining end-to-end championship decider with an Adam Durrant brace and Ryan Marchant strike sparking celebrations from Iver at the final whistle.

Old Windsor are gutted to have been beaten at the death with their goals coming from Lewis Hewitt and Nick Bolding as well as a star performance by Anthony Reece.

Iver Heath (pictured) have won six of their seven League matches this season, scoring 17 goals and conceding just seven. Their only defeat came against Old Windsor Reserves back in April. The champions will bring down the curtain on a successful season with a trip to Hambleden this Saturday (2pm).

Britwell edged another step closer to winning the Premier Division title with a 3-1 victory at SB Phoenix thanks to a hat-trick from goal machine Ben White. The consolation for Phoenix was a goal by Bailee Kline.

Britwell remain two points clear of second-placed Singh Sabha, who have a game in hand on the leaders, with the two sides set to clash in a title-decider at the Chicken Ranch on Saturday 26 June.

There will be a new name on the Premier Division title this season as Singh Sabha recovered from falling a goal behind to beat Old Windsor 2-1, ending the defending champions chances of retaining the crown.

Both Harry Laflin and Conrad Joseph were on target for Sabha with a man-of-the-match performance from Sukh Malhi. Old Windsor took the lead through Gary Ashton with a star performance from Rory Campbell.

Old Windsor were again gutted to lose at the death but the Club could not be more proud of their players in a difficult second half to the season with injuries.

Pundit missed the chance to close the gap on AFC Cressex after a 2-2 draw with the Division Two leaders. Pundit remain nine points behind but do have three games in hand including a visit from Chalvey Sports A this Saturday (2pm). Cressex go to Stoke Poges Saints Reserves in their final match of the season on Saturday (2pm).

Eton Wick moved up one place to third in the table following a 5-2 win at bottom side Phoenix Old Boys 4s, whilst Stoke Poges Saints Reserves beat AFC Winkfield Reserves 3-2.