Beaumont: 'It was nice to return home quickly and share success with family and friends' 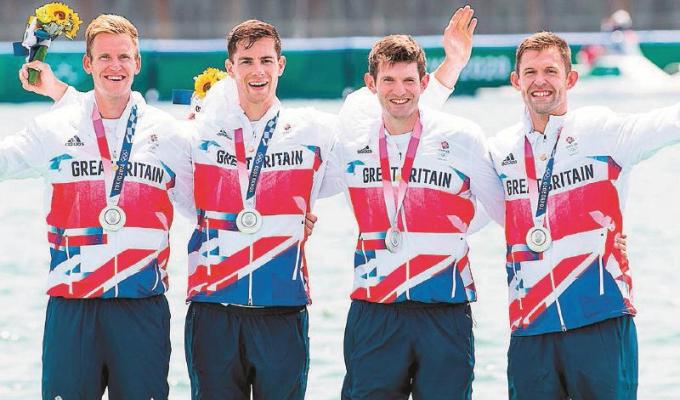 Jack Beaumont admitted it was a surreal experience to return to the UK so quickly after securing a magnificent silver medal in the men’s quadruple sculls, but he added that in some ways it was nice to get back home quickly so he could share the moment with family and friends.

Jack Beaumont admitted it was a surreal experience to return to the UK so quickly after securing a magnificent silver medal in the men’s quadruple sculls, but he added that in some ways it was nice to get back home quickly so he could share the moment with family and friends.

Less than 24 hours after Beaumont, Angus Groom, Tom Barras and Harry Leask secured silver behind the Netherlands in the final on the Sea Forest Waterway, the crew were on a flight home back to Heathrow.

The 27-year-old tweeted a photo of himself with his silver medal outside his Leander Rowing Club, and Sir Matthew Pinsent replied: “Quick out here. Quick back there. Good work.”

It was a very different experience compared to Rio in 2016, but despite the restrictions placed on athletes because of the coronavirus pandemic, Beaumont enjoyed his time in Japan and said the athletes were looked after really well by the Olympic organising committee.

“It was amazingly surreal to have such a quick return,” he said. “Our final race was delayed by a day because of a typhoon in Tokyo, but our flight home had already been booked, so although most athletes had 48 hours to leave Japan after racing, it was less than 24 hours after we finished racing that we were on a plane home.

“We were quickly out of there, but we’ve had the loveliest welcome home. It’s been so nice but I’m a bit jet lagged. I just woke up on my sofa, five minutes before you called. I crashed out watching the show jumping.

“There was an element of being able to follow it in Japan, but not as much as I’d have liked because you’re focused on your own performance. It was nice to see the headlines with the Team GB medals. In our accommodation block at the Olympic Village, we had a table where they’d add the results each day, so we had a medal tally which was cool, and it was extra cool when I saw our own result on there.”

Athletes haven’t been able to interact with the public or watch other sporting events and explore one of the world’s most populous cities, however, Beaumont said the experience was still hugely enjoyable, especially when you and others from your hometown win medals.

“It was absolutely enjoyable, really fun,” he said. “As athletes we were looked after really well. By the organising committee who were so friendly and welcoming.

“We weren’t allowed to interact with the public, but as we drove around in buses everyone was waving at us and waving flags and banners.

“The local people were excited we were there. It’s also been enjoyable being away with Team GB after such a long period of lockdown. To be somewhere with all the top athletes, it’s what we train for.

“I bumped into Maidenhead’s Tom Dean on the morning of his first final win. I had no idea at the time he was going to win a gold medal, and we also managed to get a photo together later in the week after I’d won my silver medal. I was really pleased for him.

“The experience isn’t what we wanted with coronavirus, and I’d have loved to have watched some other sports and cheered on the rest of Team GB. But it’s also had its positives, one of which is being able to get home immediately to celebrate with family and friends after such a long time away. It was awesome to go back to the Leander Club this week and see all of the people who helped me get there.”

Beaumont now plans to row for the love of it and reengage with grassroots rowing. He plans to watch the Maidenhead Rowing Regatta this Saturday and hopes to he can inspire others to live their dreams just as he has. At 27 he probably has one, possibly two more Olympic Games in him, however, Beaumont isn’t yet ‘committing 100 per cent’ to being on the start line in Paris in 2024.

“Honestly, I am just so happy,” he said. “We train so hard, and you just hope you’ll be able to get it right on the day, but nothing is promised or handed to you. No matter how hard you work you just never know if you’ll be able to achieve things like this.

“It’s been my dream since I was a child to win an Olympic medal and it has exceeded my expectations as to how cool it would be. I’m over the moon.”

He added: “I’m not 100 per cent committing to Paris right now. But I am committed to enjoying rowing. My plan is to row for the love of it and to train hard with the aim of doing better in Paris.

“During the pandemic I was training on my own on a rowing machine and that’s not why we do rowing. We do it to be out on the water, enjoying it and going as fast as we can.”