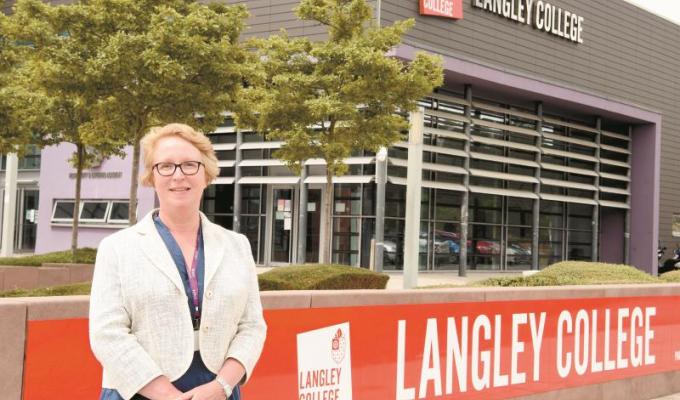 Gillian May, the new chief executive and group principal of the Windsor Forest Colleges Group

The new chief executive and group principal of the Windsor Forest Colleges Group (WFCG) has outlined her visions in her new role.

The new chief executive and group principal of the Windsor Forest Colleges Group (WFCG) has outlined her visions in her new role.

Gillian May, former principal of the Berkshire College of Agriculture in Burchetts Green, has been in post for eight weeks at the WFCG, which is made up of Windsor, Langley and Strode’s colleges.

Speaking to the Express, Ms May said that she was inspired to take on the new job due to her desire to learn more about different education sectors and fly the flag for a different kind of post-16 education.

The new chief executive also expected tough challenges ahead as young people grapple with lost learning due to COVID, calling for education establishments to step up its support in what she expects to be a ‘September we have never seen before’.

“We have got to be able to respond to that, but also the massive welfare issues that are going to surround our young people,” Ms May said.

“All schools and colleges have got to think carefully about the curriculum for September. I think we are going to experience a September like we have never seen before in terms of issues for young people and how we best support them.”

The group principal added that her vision for the colleges was centred around ‘skills’ and ‘choice’, saying that her establishments could provide both for students looking to broaden their horizons away from traditional Sixth Form at secondary schools.

She also called for a better transport link between Maidenhead and Windsor.

“What we have is a very vibrant town, and towns, in the Royal Borough, but I don’t think we necessarily have the transport system that gives people the choice they need,” Ms May said.

“What I want is to give people more opportunities, give them more options. But to do that we got to get the transport links right.”

A mini-bus service run by the college group is due to operate between Maidenhead, Windsor and Egham (where Strode’s College is located) from September.

She added: “It is about showing that there has never been as much choice. It is a great time to be young.”

Ms May said that she was seeing a healthy number of people showing interest in the Windsor Colleges’ courses ahead of September, with many existing students hoping to go off to university or the workplace in the near future.

She added that adult education was a big part of her focus, with courses on offer for those looking to hone their skills later in life.