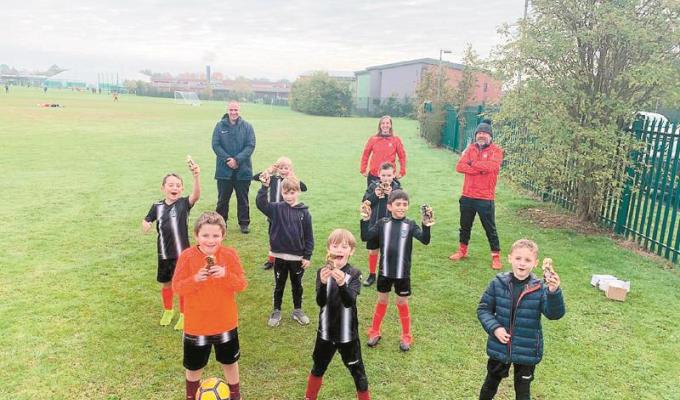 The Euro 2020 finals may be competing for their attention, but Maidenhead United Juniors teams kept their focus last weekend to progress to the finals of their respective cup competitions.

The u8s Colts (above) took on Berks Elite in blisteringly hot conditions at Upton Court Park in Slough.

Coach Vaz said: “Player of the match today went to Sullivan, who kept his position and our goal safe with a selfless display for the team. His progress and improvement is shown week by week and he and all the boys deserve this moment in the sun, literally.

“Whatever the result in next week’s final, this has been a season of disruption and uncertainty, but their progress as a team and as a group has been a joy and a privilege to be a part of. We are very happy and proud coaches.”

The u9s Braves came through an exciting and tense semi-final against a strong Sandgate team, with Arian scoring the winning penalty.

Coach Phil said: “I was really impressed with all the boys again today who are working hard for each other all the time. Player of the match goes to Arian who dominated again in midfield, won his battles and scored the winning penalty!”

The u9s Juniors delivered potentially their strongest performance of the season to defeat Berks Elite in the semi-finals of their league cup.

Coach Eduardo commented: “POTM goes to Clay, who worked really hard to make himself the owner of the midfield even when the other team was getting more physical. His maturity to keep calm focusing on the game was nice to see. And most importantly, he scored his first goal! We are really proud of you watching you develop in this complicated season.”

Only a couple of Maidenhead Boys & Girls FC sides took to the field this week, with the teams securing a win, and a loss and a draw respectively.

The u12s Jaguars conceded five second half goals without reply as they lost 5-0 to Gorings Robins Black in BYDL Division 2 on Saturday.

Earlier in the week (Wednesday) the u12s Jaguars had drawn 1-1 with Rotherfield United Wasps in Division 2.

There was plenty of drama in the knock-out stages of the end-of-season Thames Valley Football Development League cup as the Golden Eagles defeated Burnham Junior Yellows 5-4, with Gabbie Cardoso netting a first half hat-trick for the Eagles.

The Eagles went flying into half-time with a 3-1 lead thanks to Cardoso’s treble, but Burnham fought back in the second half to draw level at 4-4 with a few minutes to go. However, Raheem Angus netted from the penalty spot to send the Eagles through to the next round.

There was a cagier affair between FC Holyport and RedKore, which was won by RedKore on penalty kicks.

Holyport took the lead early in the first half through Robert Hern, who finished off a long solo run from the half-way line. RedKore equalised late in the half and took the lead after the interval, however, Holyport’s late pressure saw them make it 2-2 with minutes to spare. The tie then went to penalties which RedKore won 2-0.

For the first time in two years the Windsor FC Youth Football Tournament will take place at the New Windsor Community Centre in Hanover Way.Last year’s tournament was cancelled due to COVID-19 restrictions, but the 22nd running of the event is due to take place next month over the weekend of July 3-4.

The club will be hosting 200 team and is completely sold out. With a lot of clubs having missed tournaments such as these, organisers say the uptake has been ‘fantastic’.

Tournament coordinator Marvin Rixson, said: “Once again, we will have clubs visiting us from all over the South of England as well as those from the local area.”