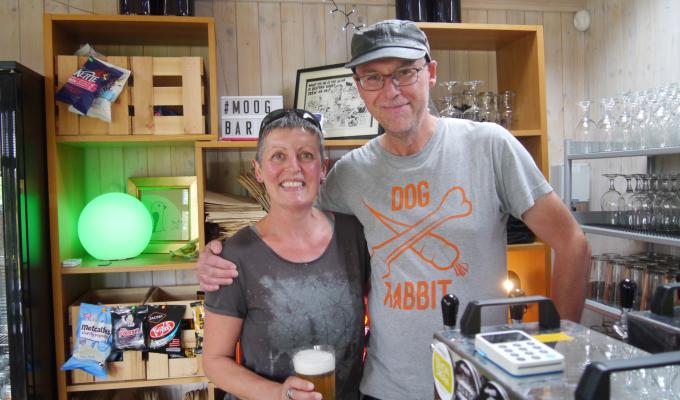 Lara Cory is a food writer who shares recipes and reviews on her Feeding Time Blog. In her Advertiser column, she looks at culinary ventures in the Maidenhead area.

Taplow’s Moog Brew has been putting the ‘micro’ into ‘micro-brewing’ for almost four years now. What started out in a tiny shed, has grown into a slightly larger garage-sized brewing operation since Margi and Id moved around the corner and into a larger property late last year.

“And we’ve roughly doubled our capacity as well,” he added.

Developing an interest in brewing after travelling around the UK, USA and Belgium it was a journey of learning for the married couple, that they recall, ‘had only one logical conclusion… to have a go ourselves’.

Winning competitions for their home brew, Margi and Id finally transitioned to the next step, giving up their 9-5 careers to seek a better work-life balance and follow their brewing ambitions.

Margi and Id brew twice a week in their garden brewery, with each brew taking about three weeks from start to finish. Cherry-picking the best advice from the professionals, Id says: “Everyone has been so helpful, it’s such a welcoming community, so generously forthcoming with information.”

Moog beers, unlike most home brews, are kegged and bottled after cold-conditioning, which gives better consistency.

The curious label designs and names are created in collaboration with their friend designer and illustrator Dave Anderson, of Dog & Rabbit, who always finds a suitable character or provides inspiration for each new brew.

In spite of the new bigger, better Moog brewery and beer garden, Margi and Id are adamant that they don’t want to expand. Instead, they want to keep a lid on the operation, making sure they can maintain their relationships with customers and neighbours, and a select few places that get to sell their kegs from time to time.

Keg Craft Beer in Bourne End and The Royal Standard in Wooburn Common are the lucky ones, who also happen to be Margi and Id’s favoured watering holes when they’re looking to venture beyond their own back garden.

“The market place is changing,” says Id. “People are looking for new and different ways to enjoy a beer and our tap room and garden provides just enough space for people to spread out or to huddle in and have a chat.”

Tastes it seems are also changing, says Id. Customers love to try the new flavours, whether it’s a citrusy summer saison or a malty porter, better suited to colder months.

“American craft brewers have taken the traditional India Pale Ale and ramped it up,” Id says. “So we use all-American hops in our Bastard Bunny Strikes Back American IPA to match the flavour profiles we prefer.”

The Moog Brewery shop and taproom is fully licensed and sells at least 80 per cent of the beer produced through the regular open days and off-sales by appointment.

Their CAMRA liaison officer describes them as a ‘community brewery’ for the valuable service they provide to the local community.

Moog Brew might be small but it’s well-loved, providing a tranquil, domestic setting to socialise and enjoy craft beer.

Margi and Id hope to collaborate with local food providers and artists for occasional ticketed events to encourage local businesses and share their beautiful new garden and facilities.

So, if you like your beer local, natural and full of character, head over to Moog Brewery for one of its open days.

You can find them at Meads End, Ye Meads, Taplow, SL6 0DH or visit them online at www.moogbrew.co.uk