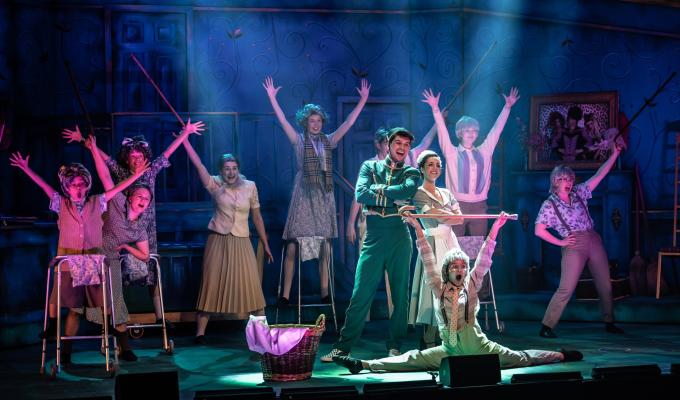 It’s great to see the lights back on in our theatres again and none shone more brightly than those on the stage of South Hill Park’s Wilde Theatre for the welcomed return of their much-missed panto.

Regular yuletide Director, Adam Stafford, and seasonal scribe, Joyce Branagh, gave this vibrant version of ‘Cinderella’ a bit of a twist by setting it in a hotel run by the ubiquitous Stepmother Ruth Less and her sneering siblings Grace and Joy Less with Buttons as the bellboy and Cinders as the maid.

Channelling a festive Fawlty Towers feel, this production was a non-stop fun filled sleigh ride of a show.

Michael Ayiotis as Buttons set the rollicking pace that didn’t falter throughout and was matched by the rest of a cast of Christmas cheer and enthusiasm.

Although as boo worthy stepmother and daughters, Jacqueline Tate, Beth Bradley & Paul Toulson proved ‘Less’ is more and Faye Ellen as Cinders and Ben Featherstone as Prince Charming melted hearts as Connor Hignell and  Aaliya Bhatti cleverly job shared as Dan and Deeny, a special mention must go to the junior ensemble I saw on the night.  Their antics as OAP resident of ‘Hardup Hotel’ stole the show in some places.

As ever the production values were high with some creative set pieces, dance routines and songs and no South Hill Park panto would be complete without the spectacular sets of Victoria Spearing and Tim Cumper’s marvellous musical arrangements.

Everyone involved has to be congratulated for this is a must see show for all the family and one that sparkles as much as a certain glass slipper.

Cinderella is at South Hill Park until January 3.